Since the 2014 edition of SXSW and the presentation of Felix & Paul Studio’s “Strangers with Patrick Watson”, 3D 360° cinematic recordings are now on the verge of becoming a major reality for the music industry, as well as in many other areas. With the programmed releases of Virtual Reality headsets (Oculus Rift, Samsung Gear-VR, Sony Morpheus…), the need for creative content for this new way of enjoying musical performances is opening the pandora box for all music creators, as well as for worldwide ethnographers. By putting the listener at the centre of a totally immersive experience, this technology offers new ways of thinking about the relationship between artists and music lovers. 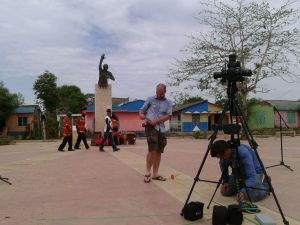 Under the Mitacs Elevate program, I am a Postdoctoral Researcher at the LARC at Laval University in Québec, Canada. In collaboration with my industrial partner, La Hacienda Creative, we have developed our own audiovisual device for making 360° immersive ethnomusicological recordings, using a custom made panoramic camera rig and an Omnibinaural Microphone with DPA capsules.

Please note that we have now upgraded from the 12 GoPros rig to a Full HD 5 GH4 Cameras, as you can see on the last picture, taken during our recent 360° shooting in Palenque, Columbia. 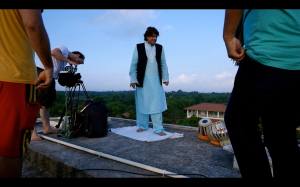 The Music Legacy Project is an innovative project that combines Ethnomusicological data collection and the use of a 360° audiovisual recording device in 3D Omni-Binaural Sound.

The main goal of this project is to document the Legacy of Musical Masters coming from many different parts of the world (starting in Canada with the potential to extend worldwide). By doing so, we want to create an Immersive Audiovisual Music Library, focusing on Sonic and Cultural aspects, while using an ethnomusicological methodology and approach. Our aim is to enable the listener to be fully immersed into musical performances, reconnecting people with ancestral musical knowledge.

These performances will be accessible to the public via virtual reality interfaces (head-mounted displays, interactive tablets, smartphones, 360° website, etc…). Focusing mainly on immersive sound experiences through omni-binaural recordings, we are also contemplating the development and production of some interactive and visual features to be implemented into the 360° videos, for example windows popping out and giving access to some social and extra-musical data. 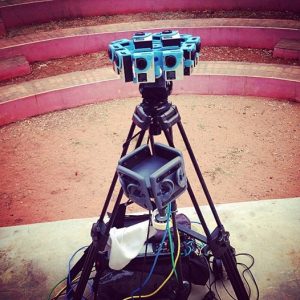 We already have all the technical equipment (360° cameras and omni-binaural microphone) to perform this revolutionary type of ethnographic recording, and we are eager to collect music of importance to Canadian Heritage (indigenous and folkloric performances, among others). Since March 2015, initial tests have been executed in India, Colombia and Canada (see pictures below). However, we now seek other possible avenues for the project, including collaborations with Museums, 360° dome like facilities, and other interactive spaces.

Since the 360 Demo we were shooting in Colombia is not finished yet (the sound is still not completely mixed), here’s the link to the first video we’ve done with our new 360 set-up, filmed on La Hacienda’s rooftop in the Vieux-Montréal. It is a Music Video for the Montreal band Gypsy Kumbia Orchestra.

You can watch the video in 360° on Google Chrome (put fullscreen and just move around the playing video with your mouse), or better with a smartphone or a tablet (iOS 8 minimum or any android up to date).

Our next planned shooting will take place next month in the Montreal area, first with a Native group called the Buffalo Hat Singers, and then with a traditional band from Morocco, Salamate Gnawa. Both band should include a Dancer, so that we could see in 360° both musicians and dancers at the same time.

Ons Barnat is an ethnomusicologist, composer, arranger and music teacher. His doctorate thesis dealt with the studio recording of the Garifuna paranda music in Central America (Belize, Guatemala and Honduras). He is a multi-instrumentalist, as well as sound engineer and producer. Under the Mitacs Elevate Program, he started a 2015-2017 Postdoctorate Fellowship at Laval University’s LARC lab, developing in collaboration with La Hacienda Creative a Music Legacy Project that aims to collect Musical Performances of the World in 3D Omni-Binaural Sound and 360° Video.
References
LARC @ Laval University: http://larc.oicrm.org/
La Hacienda Creative: http://lahaciendacreative.com/