The Song Collectors Collective celebrates the people who conserve rare oral culture within their communities in Britain, Ireland and beyond. It aims to empower a new generation of collectors while inspiring the ongoing exploration of and creativity within these communities. Below is an excerpt of a recent conversation with co-founders Sam Lee and James McDonald.

Ely Rosenblum: Tell me about how the SCC got started. What were your motivations? Did particular individuals you met encourage you to establish yourselves as a collective?

Sam Lee: Both myself and James had been recording singers for a while mostly in England, Ireland and Scotland and it was the realisation that there was no organisation or structure under which this was happening. There was no accountability to ourselves and the communities that their offering of material was being done in a sensitive and respectful way, and what was in accordance to the needs of the singers and their families. We decided that an organisation under which we could both house the recordings, explain the motivations, and make the material as readily available was really necessary. I’d met many song collectors in my work with the English Folk Dance and Song Society (EFDSS) especially Peter Kennedy and Mike Yates. Both had taught me much and also made me aware of the massive separation between the worlds of the collector and the singers and how that distance could be broken and a sense of continued involvement and care the singers would feel by singing, for not just James and myself but an audience that cares and respects and above all values their music.

James McDonald: Sam and I had been making recordings of older traditional singers for years and learned about the art of song collecting by listening to the field recordings of the 1970s and earlier. I had recorded singers such as Frank Harte in Dublin, Thomas McCarthy in London and Bruce Scott in Liverpool as well as those I chanced upon in pub sessions and folk clubs, but this was just for my personal interest rather than for publishing. As Sam was also recording singers lead us to want to find others so we could support each other’s work. We were very aware that we were learning about song collecting from an older generation, many of whom such as Peter Kennedy, Tom Munnelly, Seamus Ennis, had passed away. As well as the old singers passing away with unknown songs in their heads, there was a parallel danger of losing the knowledge and experience of a generation of song collectors. So, we invited a host of interested people to meet and discuss how we could form an an organisation to reinvigorate the art of song collecting in the 21st century. We had interest and support from the experienced collectors right through to the keen novices.

ER: How do you think your own musical practices affects your song collecting and your relationship with the singers you meet?

JM: It has always proved very helpful when meeting a singer for the first time, to be able to sing a song and prove to them that we have learned the songs and can carry a tune. It shows ability, but more importantly it shows that we love the songs and that we are genuine. Understandably, people are probably wary up to that point, but when they realise that our motivations are on the same level of theirs – to listen, sing, and share the songs, rather than to exploit them somehow – you can feel a palpable sense of trust entering the relationship. There is a reassured smile that crosses people’s face when the penny drops that we share their love of the old songs. I would like to think that the old singers we record feel a bit of hope for the future of their songs in that moment too!

SL: It’s more how does the collecting affect my musical practise. And like James I think that knowing the singer, the songs progeny, its ancestry and location means that every song almost comes with its own user manual, and how it should be treated. It’s like bringing a new plant into your home without the instructions on how to care for it, it’s so easy to ignore the song’s needs. So in my interpretation, in a modern musical setting all this awareness is vital in the approach I have and sensitivity to the making the song live and breathe. 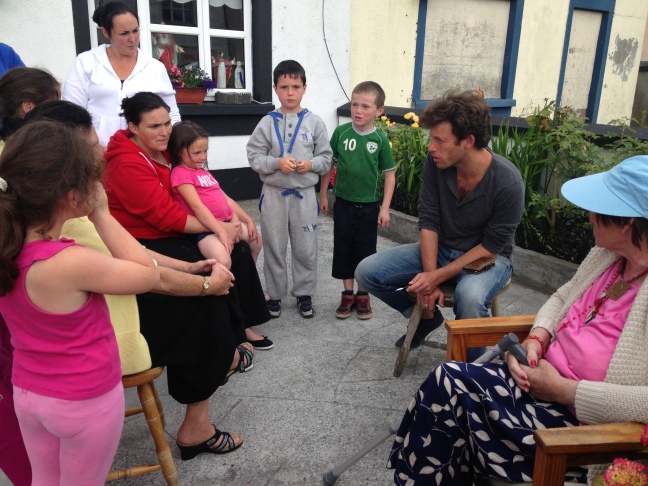 ER: During Curating Ethnomusicology you had a chance to meet a lot of ethnomusicologists, archivists and media makers. What do you feel was the takeaway from those presentations?

JM: It was hugely encouraging and inspiring to hear so many of the speakers at Curating Ethnomusicology. Jennifer Himmelreich, who is documenting First Nations culture, made concrete how import her work is by explaining that many people believe that their people are now extinct and their culture purely one for history books. This is a frightening thought. I’ve often encountered people who naively think that the old songs aren’t sung anymore, but the importance of Jennifer’s work certainly put that into perspective.

At the SCC, we have a strong philosophy of doing ‘conservation’ rather than ‘preservation’. Indeed, it’s important that we don’t allow the recordings of the singers to become more important than the singers themselves or their living voices. But hearing Jeff Todd Titon’s keynote speech on the concept of ‘resilience’ of cultures was very pertinent. I hope that our efforts in using modern technology to record and publish recordings of tradition bearers is bolstering the resilience of the singing cultures that have ironically been so decimated by the ubiquity of television and radio. The very notion of music and song as a commodity to be consumed rather than produced as part of every day living is the greatest threat to singing culture and the songs that live within it. Without valuing singing, the singers are silenced. Our intervention is simply to show an interest and to record and share the songs so that more people are aware of it and will in turn want to keep it alive.